My work week will be suspended around lunch today and not revive until mid-morning on Wednesday. This is because Carnival is upon us. Carnival is the proper name of the event that we celebrate with parades and king cake from January 6th til the day before Ash Wednesday, with Mardi Gras (Fat Tuesday) as the last day of the celebration. Since most of the parades fall on the five days before Mardi Gras Day, the media has come to call it Mardi Gras week and then simply Mardi Gras and the whole world followed suit. Most of us have grudgingly done the same, except for our elders and some traditionalists, who will still correct you if you call it Mardi Gras.

I have yet to meet anyone from “away” who understands Carnival correctly; I assume that this means it happily remains the most local of celebrations and so unless you participate in it, it cannot be described. Add to that the majority of people heard and saw it first on MTV and other party channels in the 1980s and somehow believe that our event is about showing off anatomy for Made in China beads and drinking bad beer on Bourbon.  Not that those events are frowned upon (because we believe that blowing off a little steam and having some fun is as American as the Pledge of Allegiance) but that ain’t it for most of us.

Local Carnival is made up of family and friends sitting on parade routes, cooking, laughing, dancing and catching “throws” that are now often handmade by the person tossing it to you or as often, plush toys for kids.  Many of the viewers have gathered at the same spot for decades and have bbq, red beans or hot gumbo for their guests and even access to a clean bathroom nearby! King cake slices will also be available and eaten in great numbers across the city and parish but then disappear ’til next January. I literally just saw someone leave the pastry shop near my house with a dozen king cakes; he said he was heading up to the parade route with them.

The change in that tradition has meant a wide set of flavors and healthy choices are now available for king cakes and not just the old style of brioche and colored sugar frosting:

Whole wheat, cream cheese-filled, fruit-filled and even a French version, the galette de rois which is a lovely version as well and is now widely available: 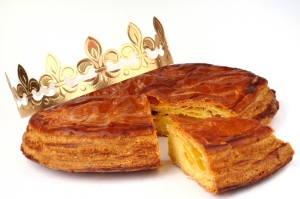 In the days and weeks before Mardi Gras, every thrift store and fabric store is full of locals buying items for what they will wear on Fat Tuesday. Glitter, satire, puns, adult jokes, cute group costumes, gorgeous creations and even store-bought costumes will be seen on the streets from Bywater to St. Charles tomorrow. The day is spent either on St. Charles seeing the last parades, and/or bicycling or walking through the downtown neighborhoods with one of the dozen walking parades or just meeting up with friends and dancing in the streets with a cocktail in hand. The gay section of the Quarter has a extraordinary costume contest on Fat Tuesday which has become one of the biggest events of the day and is held outside near the oldest openly gay bar in the U.S., Lafitte’s In Exile, on the street sometimes called the “Velvet Line” for the number of gay-owned businesses and LGBTQ residents in that section of Saint Ann.

The walking clubs abound, but the father of them all is Pete Fountain’s Half-Fast Walking Club and the mother of them all is the Society of Saint Ann. Pete was the great clarinetist of New Orleans jazz and participated as long as he could although no longer able to walk the route the last few years. His group plays and wends its way through the streets, bestowing beads on women and children. Saint Ann starts in the Bywater and parades through the Marigny and into the Quarter, ending at the Mississippi River where the ashes and remembrances of those who passed away that year will be honored by casting them into the river. It’s an extremely moving experience to participate in.

Today is Lundi Gras (Fat Monday, also known to the pious as Shrove Monday) and is the day when Rex and Zulu meet up at the river and hold a day-long free celebration. Both of those krewes parade tomorrow, with Rex closing out the float parades for 2016 by early afternoon.

I am also going to Lundi Gras brunch which has become a thing in the last few years: my pick has been Meauxbar, which is in the Quarter and has a special 35.00 menu for this weekend (along with bottomless cocktails for 18.00!). Meauxbar is a fav of mine for many reasons, not least of which is that the last chef worked at the farmers market and is a fierce proponent of cooking seasonally from regionally purchased items directly from producers. Typical of Kristen, she also gifted her king cake recipe to those who come by. Lucky for you, they also posted it online and so I include it here:

One of my favorite rites of the season happens today when Rex, upon meeting with the mayor of New Orleans, issues this decree:

‘I do hereby ordain decree the following,’ Rex says, ‘that during the great celebration all commercial endeavors be suspended. That the children of the realm be freed from their studies and be permitted to participate in the pageantry. And to the city’s political leaders,

‘That the mayor and City Council cease and desist from governance.”

Mayor Mitch Landrieu consults with council members and other advisers to decide whether to give in to the king of Carnival’s demands. Finally, the mayor says:

‘We will fulfill the will of the people and turn over the key to the city to you, so that tomorrow in New Orleans will be a day of abandon,’ Landrieu said. ‘Happy Mardi Gras.

How wonderful to see how public spectacle is respected each year and made into tradition with this decree and response from government!

All of this ends abruptly at midnight tomorrow, when the police close the streets, but most locals will have been home for hours by then, with costumes off and maybe some porch time with neighbors for the rest of the day. Wednesday the churches will be full and the Lenten tradition of giving up meat or sugar or alcohol will begin for most New Orleanians, Catholic or not. Some funny folks will tell you that they are going up king cake which is funny the first time you hear it every year, but for those who use it after that, we all groan and make them stop.

The good news is that the Lenten abstinence usually helps the farmers market attendance in the days and weeks after the celebration!

So, from my French Quarter office which will be dark ’til Wednesday-Happy Carnival/Mardi Gras everyone.

Here are the questions that sparked this FQ project:

Who uses the Quarter to work, to live, to meet, to drink/eat, to shop, to protest?
Do enough people love it and care for it?
What do we need to do to keep it from atrophying into complete caricature and what hard truths and practices do we need to consider to restore its diversity?

If you have an opinion, I'd like to hear about it. This project will tell details of all kinds, of every single block in the Quarter and of New Orleans. Reviews, interviews, essays, stories, criticism. And links to those places and written histories that need to be remembered-leaving the obvious to the postcards-to dig up some old underused ideas and add some new innovations to our city center. Blog pieces, zines, broadsheets, articles, maps and other forms will be used in this project.

I am beginning research on the commercial history of Jackson Square since the addition of the Pontalba Bldgs. Feel free to contact me if you have primary documents, ephemera or first-hand accounts of Jackson Square retail, apartment dwelling or other commercial aspects pre 1950s. The latter years and the entire history of the artists colony will be tackled later.

A Job, a gig and a hustle

pick a street or a subject to view posts..

Why we should study the French Quarter:

“Under the seeming disorder of the old city, wherever the old city is working successfully, is a marvelous order for maintaining the safety of the streets and the freedom of the city. It is a complex order. Its essence is intricacy of sidewalk use, bringing with it a constant succession of eyes. This order is all composed of movement and change, and although it is life, not art, we may fancifully call it the art form of the city and liken it to the dance — not to a simple-minded precision dance with everyone kicking up at the same time, twirling in unison and bowing off en masse, but to an intricate ballet in which the individual dancers and ensembles all have distinctive parts which miraculously reinforce each other and compose an orderly whole. The ballet of the good city sidewalk never repeats itself from place to place, and in any once place is always replete with new improvisations.”
Jane Jacobs